USE OF MANGO TO SWEETEN CITRUS FRUIT PRODUCTION 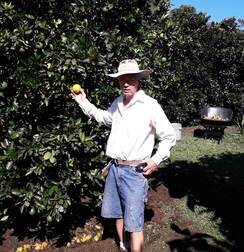 The citrus produced here at our farm is sold to the local market. Juan Carlos Rodriguez purchases the citrus and sells it at the community Growers Market. Our fruit is in competition with citrus grown in warmer regions on larger commercial farms. When we did a comparison their fruit was significantly sweeter than what we were able to produce. After discussing this with other Growers we learned that many farms use a by-product from sugarcane production called Miel de cana, which translates to honey from the sugarcane.

We consulted the local sugarcane refinery coope, Victoria, who sells the product, and we were prepared to purchase it. However, when cleaning out the truck to prepare to drive the distance to purchase the product we noticed the mangoes that are falling from the trees which we have to pick up to clear the driveways and areas around the home.

For years we have been using these mangoes as food for the California red worms that turn our compost into lombri post or fertilizer. Because the mangoes decompose rapidly due to their soft texture we decided to try those directly under the tree.

​To start with, we used a shovel to create a very shallow trench around the tree below the drip line or at the extent of the last leaves on the branches most distant from the trunk. However, we could see the shovel was disturbing the fine roots of the citrus tree so we then switched to using a stiff tine garden rake to pull back the soil to retrieve the mangoes. 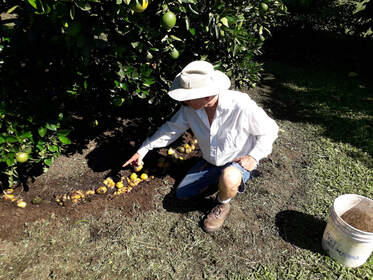 Because we have been placing organic material under the trees for 10 years the soil is very light and easy to work. It helped that the soil base was volcanic ash with no clay and is very porous. As we pull back each rake width of soil we would see between 2 to 5 earthworms within each 30 cm by 15 cm swath. This gave us confidence that the worms together with the lightweight organic topping would help to decompose the mangoes quickly.

As we worked through the project with the help of a volunteer, Geoffrey, the rhythm and progress began to flow smoothly. After one day of using a wheelbarrow, a 5 gallon bucket to put the mangoes in, and a light rake Geoffrey observed that the stoop labor was hard on his 60 year old body. Using material that we had saved in the bodega, or the barn, he devised a scoop attached to a handle. This fruit scooper became very popular as it eliminated the bending needed to pick up the mangoes.
He developed a method in place of trying to fill a heavy bucket that would weigh 10 kg (22 lb). He would just fill the scoop with three or four kilos of mangoes and put them directly into the large wheelbarrow. By chance, he selected a piece of wood to make a handle that was a little bit short for his 6-foot frame, so to correct the short handle he then extended it with a stiff rubber hose which was easier to hold, and you could use with your arm to get leverage. Also, the relatively softer rubber did not cause a callus on your hand or your forearm as you were working with the tool.

After 10 days we returned to the first citrus tree and found the mangoes quickly decomposed. What had once been bright yellow skin was now black, and the fruit was more than halfway decomposed with red earthworms visible on most of the fruit.

It was also beneficial that this project was done in the rainy season which is the ripe mango production season. In a 3 week period we had received 20 cm, or 8 inch of rain and although the area below each citrus tree was sheltered by the leaves the tree absorbed some of this rainfall. However, the entire area benefited from the moisture and this enhanced the decomposition.

We favor this composting in place or on-site below each tree because it reduces the labor. Also, our worm house where we produce compost is only 64 square feet, or about six 6 metres square. Below the 100 citrus trees on the farm we covered about 8 square meters in a circular pattern about half a metre wide and 15 meters in circumference on each tree. 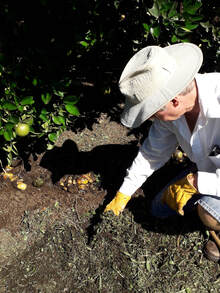 Had we tried to process the compost all at one place, or at several places, we would have had to haul both the mangos, and the soil and organic material to cover it, to aid in the decomposition. Additionally, because the work would be done outside we would have attracted rodents, that are found here on the farm such as rats, mice, skunks, and armadillos. It also would attract birds, flies and mosquitoes. Also, such large-scale composting produces excess heat, biogas and odor that becomes unpleasant as the fruit decomposes.

​Because of the 20 cm of rain that we received most weeks the mangoes would have become a wet mush and the oxygen necessary for decomposition would have been drowned out.